This week, Álvaro Bautista was announced as joining the works Ducati team in the World Superbike Championship for 2019. Today Stelvio Automotive takes a look into the career of the rider who never quite realised his dream in MotoGP, but still has the potential to stamp his name into the record books. 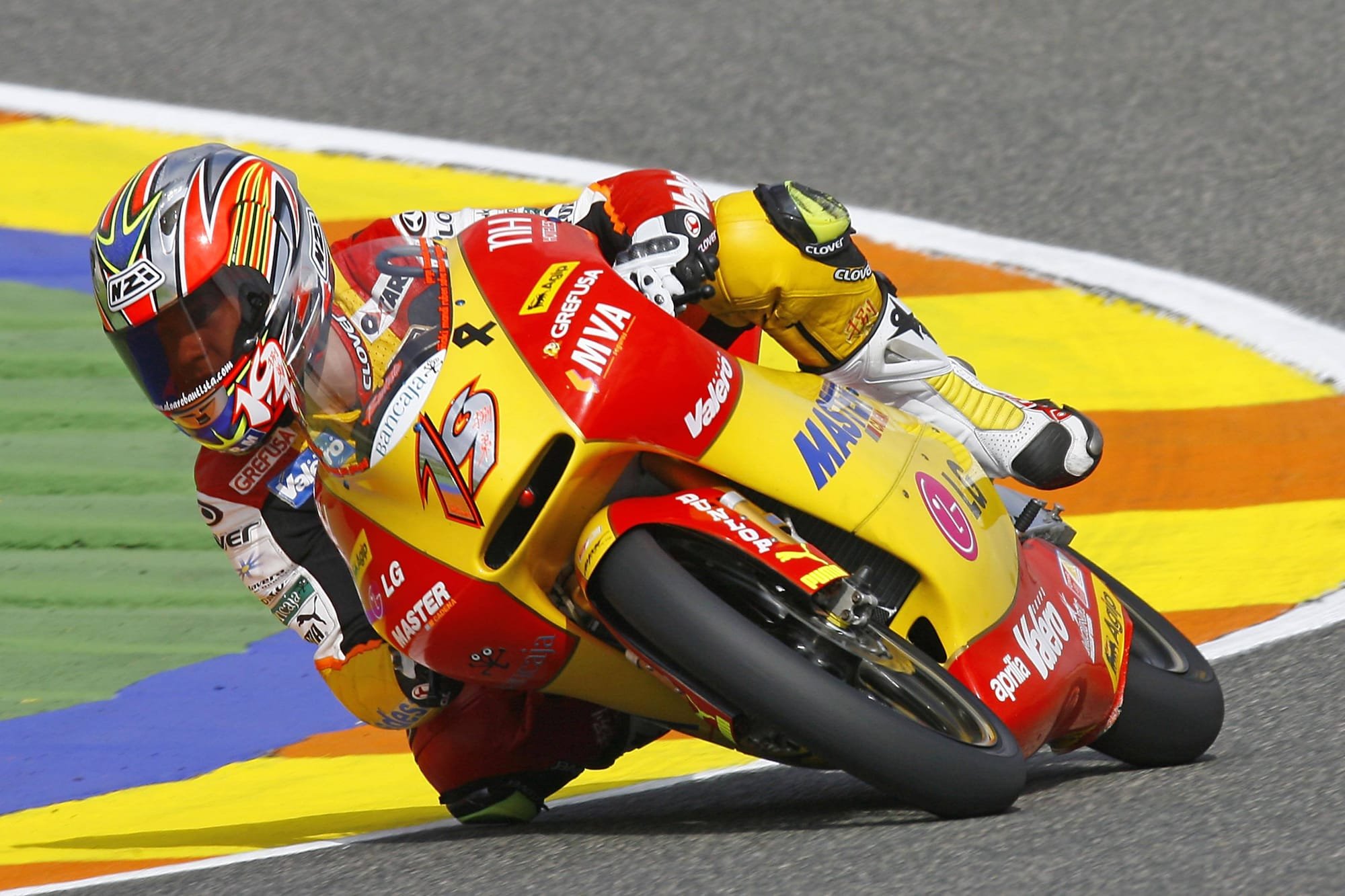 Alvaro Bautista was the second ever rider I witnessed win a race on a motorbike. When I watched the recording of the Estoril MotoGP in 2006 (won by Toni Elias by 0.002 seconds), the following race was that of the 125cc junior class. It was to be one of the most dominant performances I have seen, even to this day.

The then 21 year old, who had taken pole position by 0.689 seconds (a huge margin in 125s) lead away on the first lap and just kept increasing his margin for the rest of the race, winning by 15 seconds. This was not a wet race; the conditions were perfect and the old 125cc formula in MotoGP almost always resulted in pack races where a leader was literally unable to pull away as the riders behind benefit from slip streaming one another to swallow up any breakaway attempt.

Bautista’s victory was to be his 9th of the 16 round season and his first as a World Champion as he had already won the title with 3 races to go. He moved up into the mid-tier 250cc class for 2007 with the Aspar team, won his first race at only the 5th attempt, a second at Portugal just as in 125s the year before and finished 4th as the rookie of the year behind the future MotoGP stars Jorge Lorenzo and Andrea Dovisioso. Bautista looked like a firm favourite for 2008. 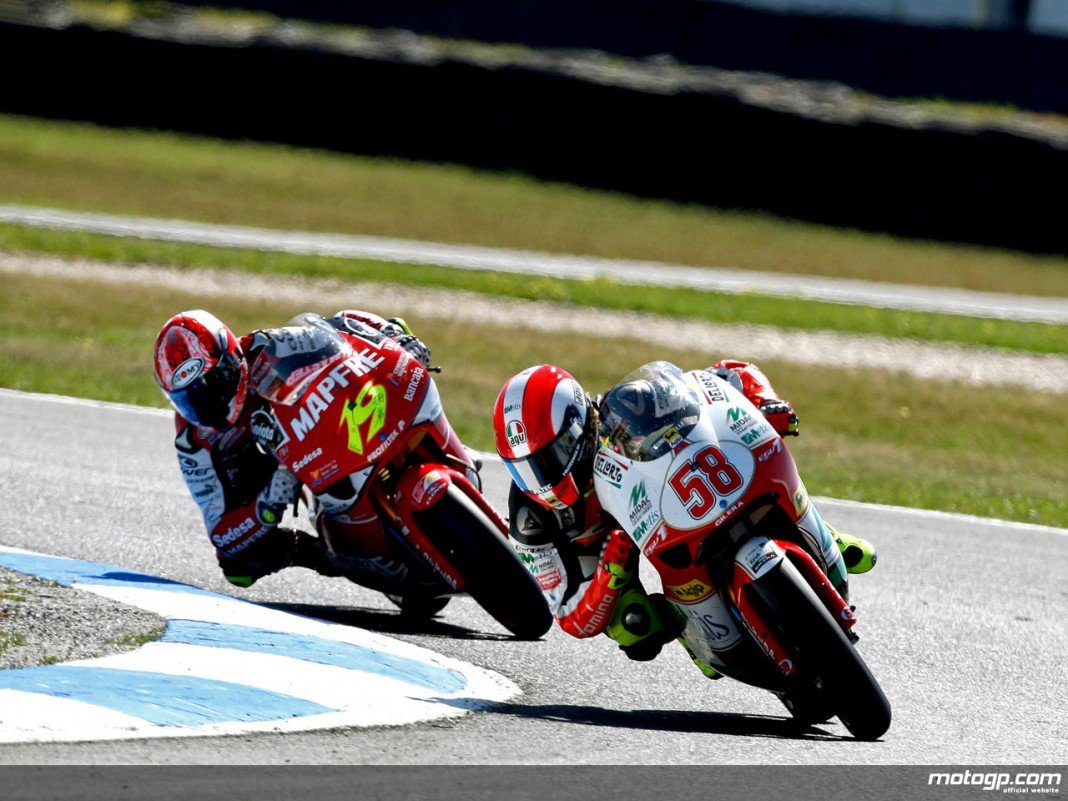 However, Bautista’s coronation was to be rather rudely interrupted by one particular Italian, Marco Simoncelli. Bautista had a very smooth, perfectionist riding style, a true track racer who made the bike (even a bucking bronco of a 250) glide through corners and preferred attacking the clock instead of rivals if given the opportunity. Simoncelli was the absolute mirror image opposite. He was aggressive in every part of his riding style, someone who would look like he was going to crash every time he came out of a corner and again every time he sent his bike into a diving pass on an unsuspecting rival.

This created a rivalry between Álvaro and Marco that would last all the way through 2008 where at least one of the two stood on the podium in all but 3 races. They came to blows on track on many occasions and eventually it was Simoncelli who won the title, Bautista was 2nd as the two dominated the season. Oddly, both riders stayed in the mid-tier in 2009 in an attempt to win the final ever 250cc Championship before the new Moto2 class was inaugurated in 2010. Even odder still, both Bautista and Simoncelli would be beaten soundly by eventual winner Hiroshi Aoyama and runner up, Héctor Barberá. But despite the setback, both of would still join MotoGP a year later. 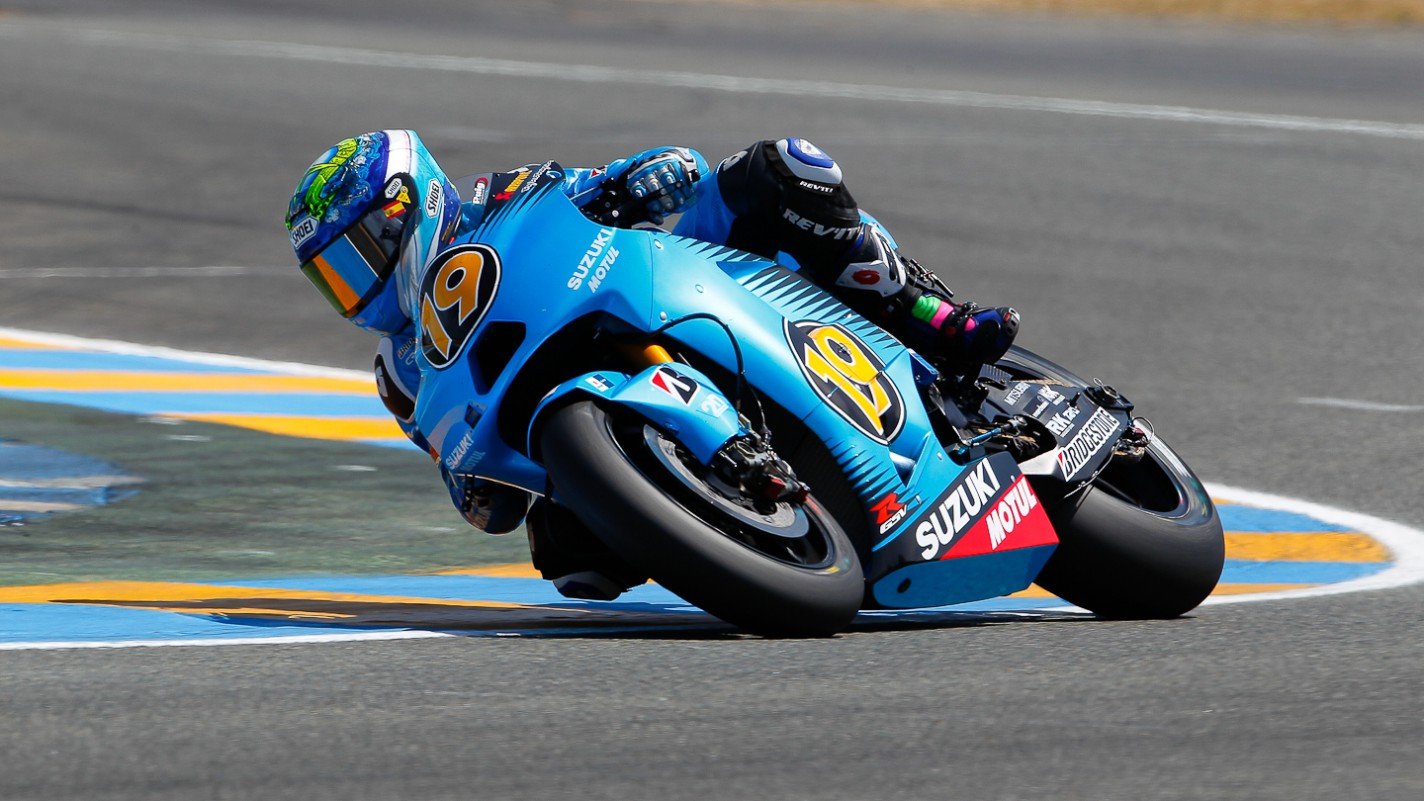 Bautista joined Suzuki, supposedly as the understudy of Loris Capirossi, however, Bautista was soon to show how good he could be in the top class. Through 2010 he scored double the points of his great teammate, the Suzuki though was nowhere near the pace of its rivals and Bautista would end up in 13th place on 85 points, nearly 300 off eventual Champion, Lorenzo. The Suzuki was, unfortunately, even less competitive in 2011, Bautista scored 67 points, again finished 13th and dwarfed Capirossi’s tally over the season for a second time.

Meanwhile, riding for the satellite Gresini Honda team, Simoncelli had hauled his bike up to 6th in the standings. Sadly, at the end of the season, Marco was killed in an accident at Sepang and as Suzuki decided to pull the shutters down on its MotoGP operation this loss offered a big opportunity to Álvaro to fight towards the front as he signed as the replacement for the Italian for 2012. 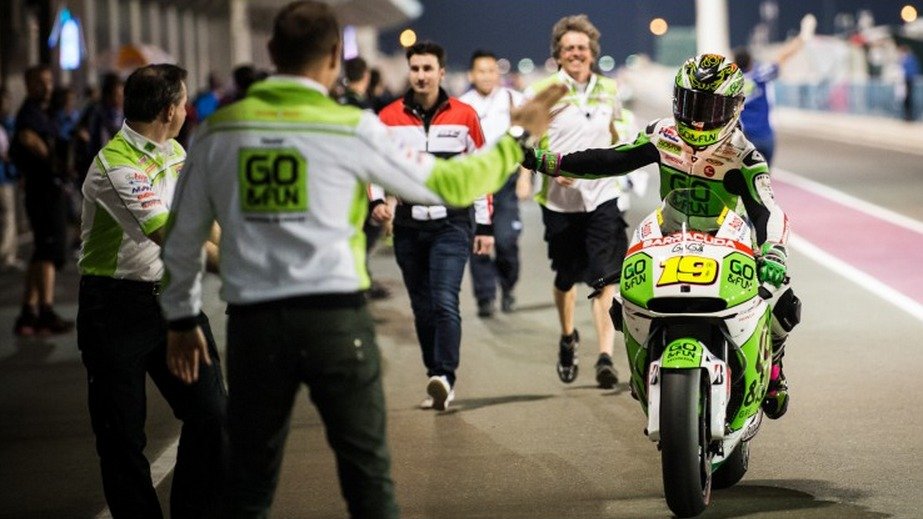 He didn’t disappoint. Bautista had a fantastic season finishing 5th overall behind only the works Hondas and Yamahas. He took pole position at Donnington Park and scored his first two podiums at San Marino and Motegi. He impressed again in 2013 as he finished 6th with top 5 results in 9 of the 18 rounds of the Championship.

But from then on things were never quite to fall in Bautista’s favour. The 2014 Gresini bike was not as easy to ride as its predecessor. Bautista did manage to score a podium finish at Le Mans but he also retired from 7 races, winding up 11th in the standings. Gresini and Bautista joined forces with Aprilia for 2015 and 2016, unfortunately, despite great results from Bautista and easily beating his teammate Stefan Bradl, Aprilia decided to drop him for the 2017 season, a decision the team have recently openly admitted was a mistake. 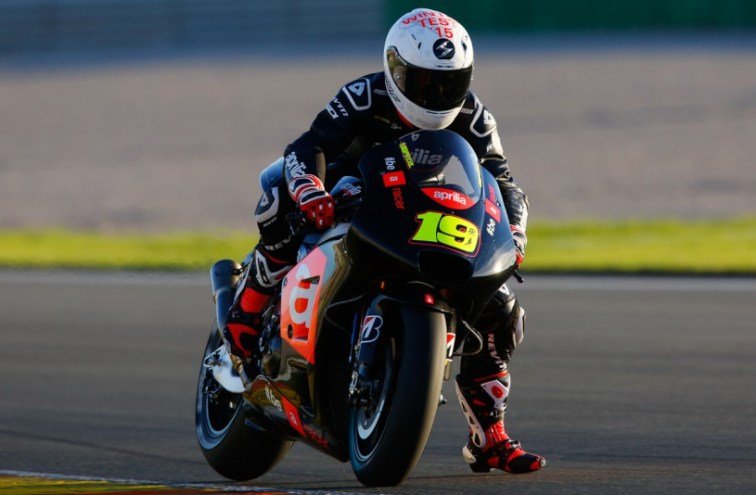 Bautista moved to his old junior team, Aspar, who were now in the top class with a satellite Ducati. Bautista showed amazing form over the winter which lead me to say he could be a dark horse for the season, he even scored a 4th place at the second round in Argentina. But overall the season was a disappointment, too many mistakes including crashes resulted in 13th in the standings. Now in 2018, the year has been a tale of two halves. Initially the Ducati GP17 was incredibly hard to ride, but as the team has slowly got to grips with the set-up, Bautista has scored top 10s in 7 of the last 8 races.

Despite these solid results and murmurs of him moving to Yamaha, Bautista has instead been forced off the grid for 2019, due to the torrent of rising stars coming from Moto2, the deep pockets of his teammate (who has scored 4 points to Bautista’s 57 at the time of writing) and the limited spots available on the grid, Bautista has been left with having to make a big career change and make the move to the World Superbikes.

And I for one cannot wait to see what happens. 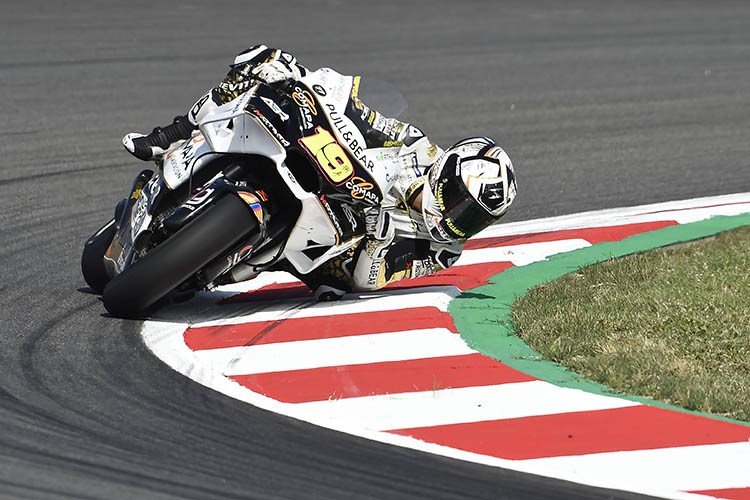 Álvaro Bautista has not been beaten by any teammate he has had since 2004 and he is moving to the works Ducati team in WSBK, one of the top 2 manufacturers currently in the series. His team mate will be Chaz Davies who has finished in the top 3 of the Championship for the past 3 years and is again 2nd in 2018. If Bautista can continue this trend over to the new chapter of his career he will likely be firmly in the hunt for the world title.

He will be riding the beautiful Ducati 1199 Panagali R (below) against the dominant Kawasaki Ninja ZX-10RR with its superstar rider, Jonathan Rea. Rea will likely be only the second ever rider to achieve 4 WSBK world titles, something he has done successively. There will also be strong opposition from Yamaha, Honda, Aprilia, BMW and MV Augusta but it cannot be said that Bautista is not on one of the best bikes for his debut season. 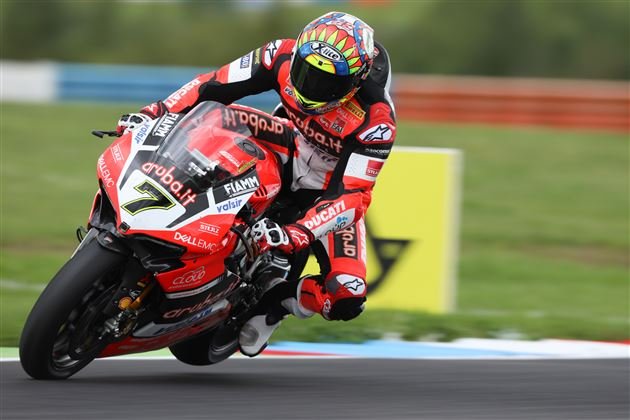 Ducati are easily the most successful manufacturer in the WSBK Championship. They have won 17 times with their nearest rival only with 4 manufacturer’s titles to any of their names. Ducati have not won since 2011 when Carlos Checa was victorious in 15 races of the 26 round season but they have been in the hunt more often than not since. Álvaro will be 34 years old at the start of the new season, no longer a young rider, however, that is by no means a barrier. In the WSBK riders like Max Biaggi was 41 when he won for Aprilia and Checa was 38, Rea and Davies are both 31 and Marco Melandri (who Bautista is replacing) is currently 36. If you are fast enough, age is not a limiting factor.

I’m ecstatic Ducati have seen Álvaro’s potential and given him the chance to win a top tier Championship with their legendary WSBK team. As a fan I cannot wait to see Álvaro fighting for victories again. It will be a tough ask but I genuinely feel he can win and maybe even become a great name in the WSBK record books. If Ducati and he can stay at the top of their game for the next 4-5 years, he could become the latest in a line of MotoGP stars to transition to the WSBK arena and be successful.

I’ll be watching the series again for the first time since Nicky Hayden died in 2017, I cannot wait to see what Álvaro can do and I wish him the very best of luck. Stay tuned to Stelvio Automotive next year to keep up with the 2019 season and see if Álvaro Bautista can live up to the promise he showed in his junior career now he has finally been given the opportunity to shine. 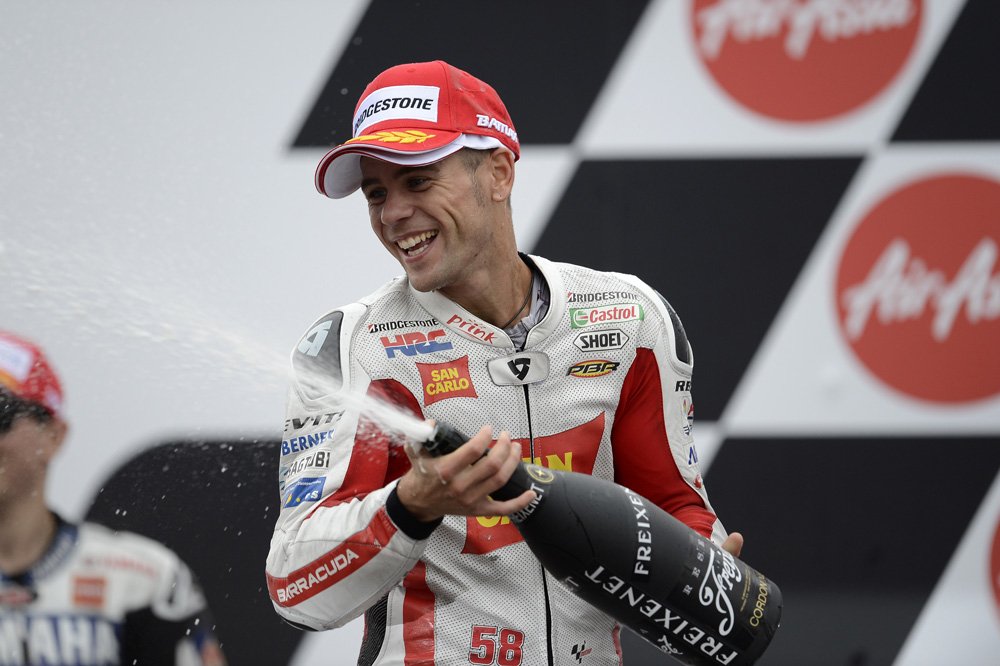