12 years on from their perfect season, after a change of ownership, a huge development effort, millions of man-hours and unparalleled amounts of heart, passion and flair, 2019 could finally see the re-crowning of Italy’s National team. Today Stelvio Automotive looks back at Ducati and evaluates their MotoGP title prospects. 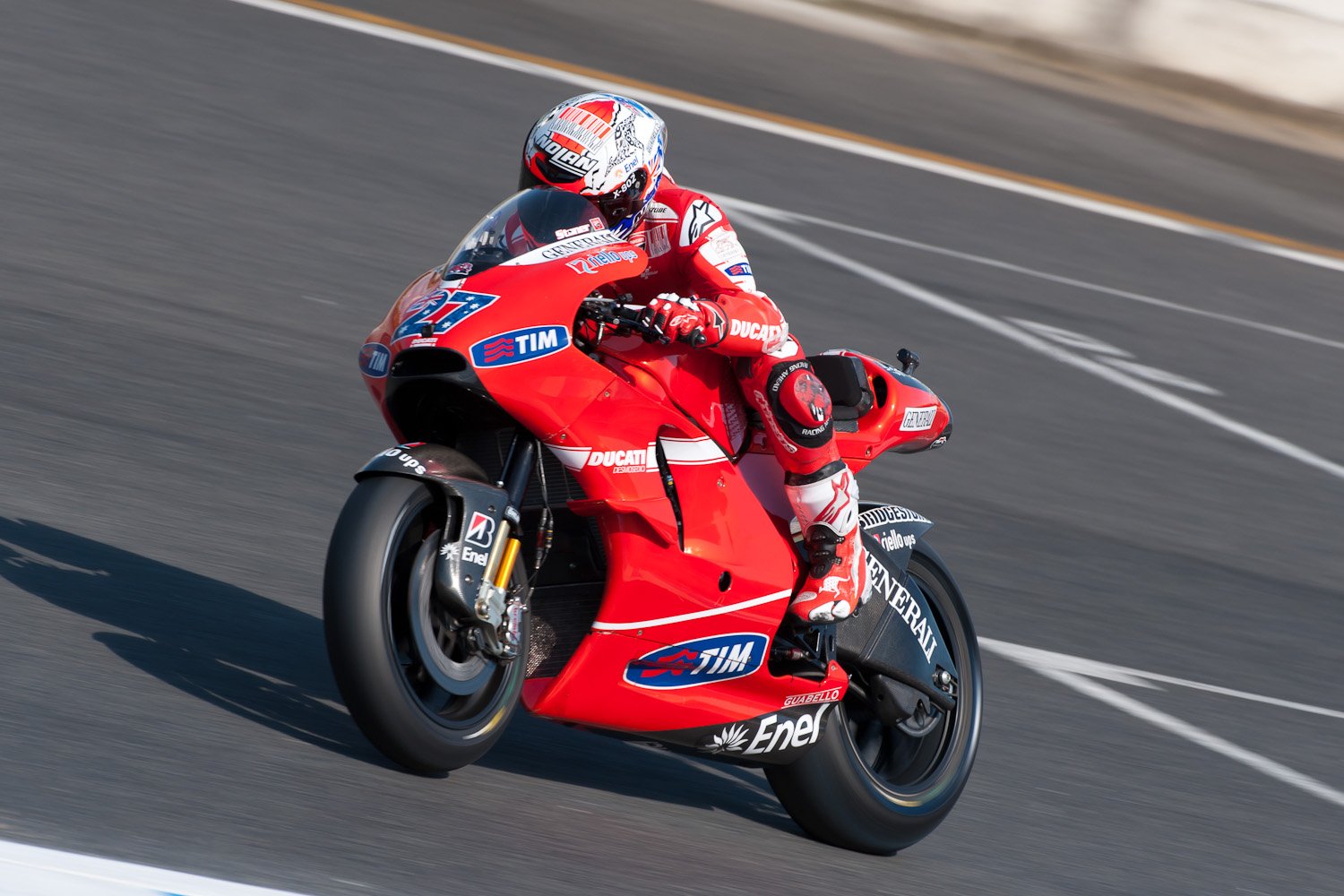 12 years ago, Ducati won their first and only MotoGP Championship with Casey Stoner. It was the year which shocked the World when Ducati’s Desmosedici GP7, propelled by an engine so powerful it made its rivals look like they were in a different (and significantly lower) class, dominated the field. Stoner won 10 of the 18 races, Ducati as a team won 11, they failed to make the podium on only 2 occasions and they beat 2nd place by more than 20% in the Manufacturer’s Championship. It was an embarrassment to the establishment of Honda and Yamaha which was to bring a development war so costly it would almost bankrupt the team that caused it.

Ducati became the first non-Japanese winner of motorcycle racing’s premier division since MV Augusta’s dominative era ended in 1974. Ducati had made the most of the rule changes, brought in for 2007, with the introduction of the 800cc formula creating a breed of slower bikes in a straight line but faster in the corners. Ducati, an historically good developer of powerful engines relative to their size, hit the nail on the head with the new rules and, in doing so, saw the biggest leapfrog in performance over the established old guard the motorsport world had seen in the 21st Century (and only since topped by Brawn F1’s triumph in 2009).

I remember vividly seeing the panic and horror on the faces of the crews at both Honda and Yamaha as their bikes would come out onto the main straight, be 5 lengths ahead of Stoner or Capirossi, be passed a third of the way down and then be gapped another 10 lengths before the braking zone. This caused the two big Japanese factories to throw re-design after re-design of engines and parts at their bikes just to numb the live torture that was being broadcast to hundreds of thousands of fans all over the world as Ducati swept to victory. 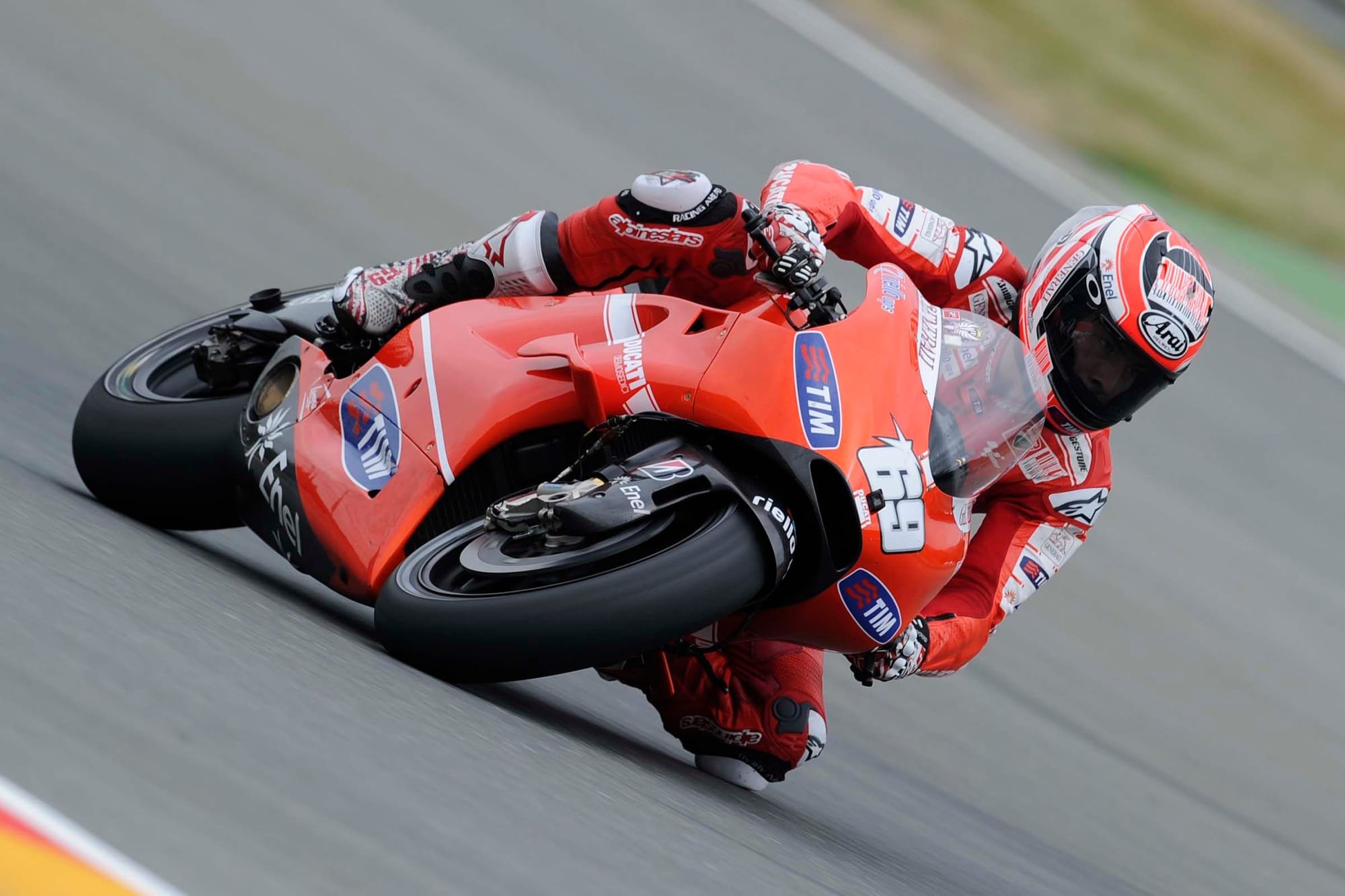 2007 and 2008 saw the screamer and big bang concepts from Yamaha. It saw new exhausts, revised fairings, new riding styles, a suspension, brakes and tyre war. Almost nothing was off limits as MotoGP went berserk. And, as Ducati’s advantage was closed up, the weaknesses of the bike’s cornering ability became more and more apparent. Ducati flip flopped between a tubular and carbon-fibre chassis and introduced the first carbon-fibre swing arm. They were the first manufacturer to add winglets to the fairing in 2010 (above). They were experimental on their tyres and their suspension but all this mechanical pioneering was to be in vein as Ducati’s Achilles heel was the bikes ECU, its electronic brain.

MotoGP in the 800cc era saw a technological revolution as Yamaha and Honda developed ultra-trick systems which interconnected the traction control and other aids with the physical parts on the bike which allowed the bike to learn the track and take corners at unbelievable speed. Ducati and their electronics couldn’t compete with this technology and, as a result, a Ducati rider would often be seen sliding through a gravel trap with the bike flying off into the catch fencing due to it being asked to take a corner faster than the electronics could compute as physically possible. This was known as the Ducati front end crisis and lasted from 2009 to 2015. The red bike was considered a poisoned chalice, the worst, most dangerous bike on the grid which only those with no other options would ride. To some riders, it was almost considered a death trap. 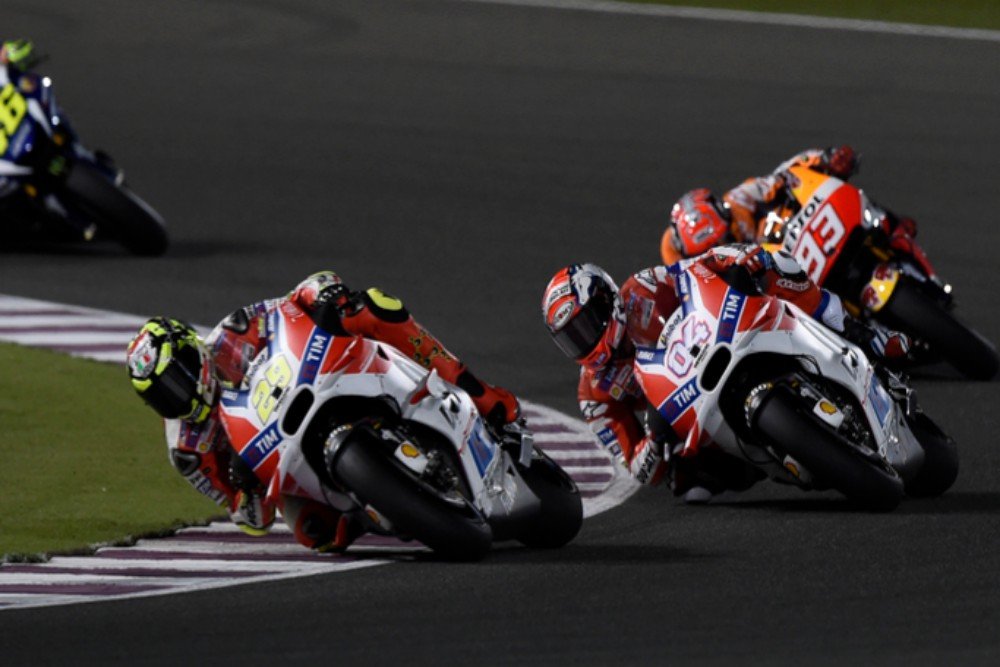 This hugely expensive development race eventually took its toll and, as a result of it and the economic crash, Ducati were eventually bought by Audi in 2012 in a desperate effort to acquire the investment in the company and the team to restructure the operations and the factory to bring the fight to the big two. Under Nicky Hayden’s and then Andrea Dovizioso’s guidance, Ducati began to turn things around on track and slowly but surely tackled and defeated their weaknesses. By the time the cornering issues were sorted out Ducati were no longer the dominant force in straight line speed. Towards the end of the 800cc era it was Honda who had the best bike when the riders asked for the power and Ducati was in-fact slow enough to be attacked by Yamaha when the slipstream was in effect. At their worst Ducati were around a second or more per lap slower than the leaders, but, once again, that balance of power was about to change.

MotoGP went to the current 1,000cc formula in 2012, this did little to upset the order initially, but what then did make the difference was when the sport went to a mandated, control ECU at the beginning of the 2016 season (above). This one change wiped out a huge proportion of Yamaha and Honda’s cornering advantage and annulled almost a decade's worth of technological endeavour. Ducati were back in the game. 2016 saw them win their first 2 races in 5 years as well as iron out the remainder of the cornering kinks. 2017 saw Andrea Dovizioso take the fight to Marc Marquez all the way to the final round of the Championship with 6 victories to his name. He followed this up with another runner up placing in 2018 and Ducati again achieved 6 victories through the year. As Yamaha’s M1 and Honda’s RC213V have both had issues, Ducati’s Desmosedici is now considered the best overall bike on the grid for any rider prepared to push it to its limits. And that’s what brings us to 2019. 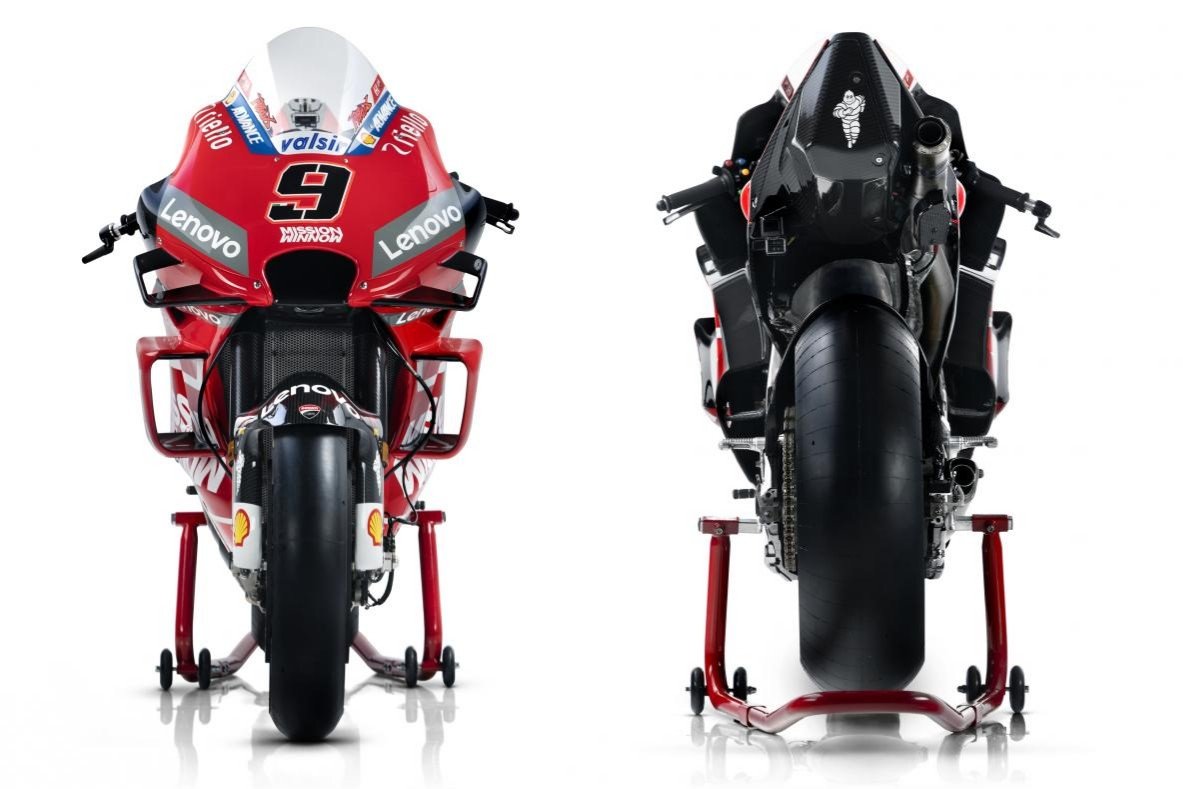 This year has, in prospect, a combination of elements to create the perfect storm for Ducati to finally reap the rewards of all the hard work it’s done over the last decade. Starting with Honda, and their 2019 signee, Jorge Lorenzo, moving across after 2 mediocre years at Ducati. Joining defending champion, Marc Marquez, Lorenzo is looking to rebuild his career and isn’t going to pull any punches in trying to do it. Marquez could well be at the end of a few of those throws as the inter-team rivalry takes shape through the year and that could well play to Ducati’s advantage. Yamaha (with equally rivalling team mates Valentino Rossi and Maverick Viñales) are still trying to get themselves out of a rut which saw them suffer their second worst season, ever, winning only 1 race in 2018 and any Honda calamities should see Ducati as the next team up to take the spoils.

Ducati’s pairing in Andrea Dovizioso and Danilo Petrucci, promoted from the junior team for 2019, is much more hierarchical. Dovi will be the team #1 without much question. Petrux is undeniably fast and had scored incredible results for the Pramac Ducati team with 5 podiums in the past 4 years, scoring only 3 points fewer than Lorenzo while both were on Ducati machinery and deservedly getting promoted because of it. But he will not have Dovi’s race craft, at least not during the first half of the year, and Ducati will not let its riders repeat the embarrassment caused by Dovi and then-team mate Andrea Iannonne when they threw away podiums and possible victories as team mates in 2016. 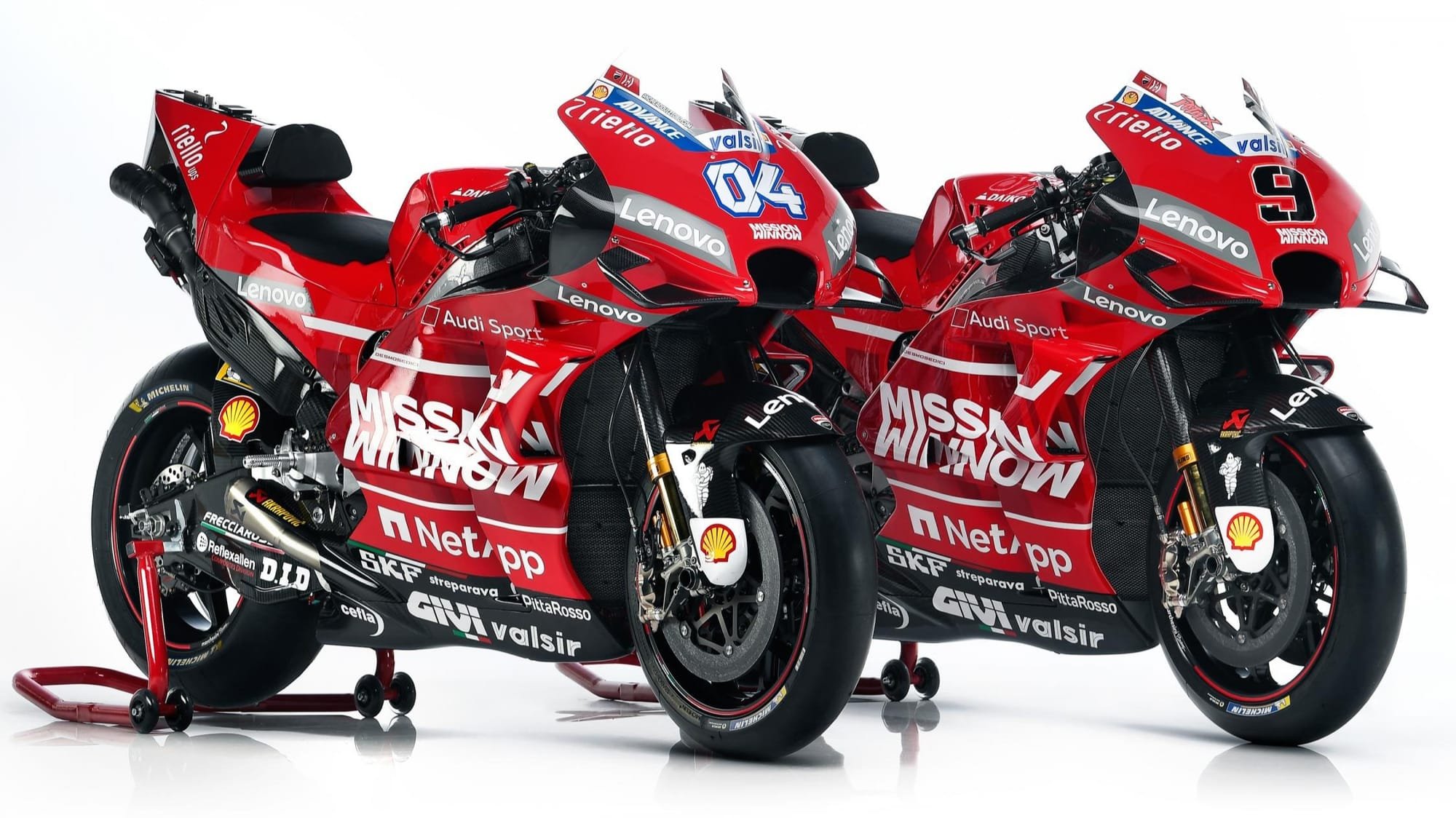 Additionally, both Ducati riders are healthy, young, confident and motivated with a clear set of goals ahead of them. All traits which Honda and Yamaha’s representatives are missing in at least 1 category. Lorenzo and Marquez are both recovering from surgery, Rossi is at 39 years of age and with split priorities with his VR46 junior team on the cusp of MotoGP, and Viñales, clearly angered that he has only won 4 races since leaving Suzuki, not put up as impressive a season in the past 2 years and not had a Championship run on the works Yamaha. Ducati have to capitalise from their rival’s troubles and go in for the kill early before the Japanese rivals return to full strength.

The final reason. The Desmosedici GP19 itself. It is beautiful, possibly the best-looking MotoGP bike I’ve ever witnessed. I could go into the details such as the sculpted winglets, evolved to precision over a decade of testing, the fairing which has become more and more pointed at the nose to break the airflow and funnel it around the bike and rider, reducing resistance to gain speed while keeping the front of the bike stable, all the way to the fairing-hugging exhaust which is offset to the sawn-off stub tail section. But instead, you can just look at it for yourself and appreciate how good looking that particular shade of red is on a race bike and you can simply agree with me.

It’s a fact that good looking creations are successful in motorsport... let’s see what the GP19 can do. 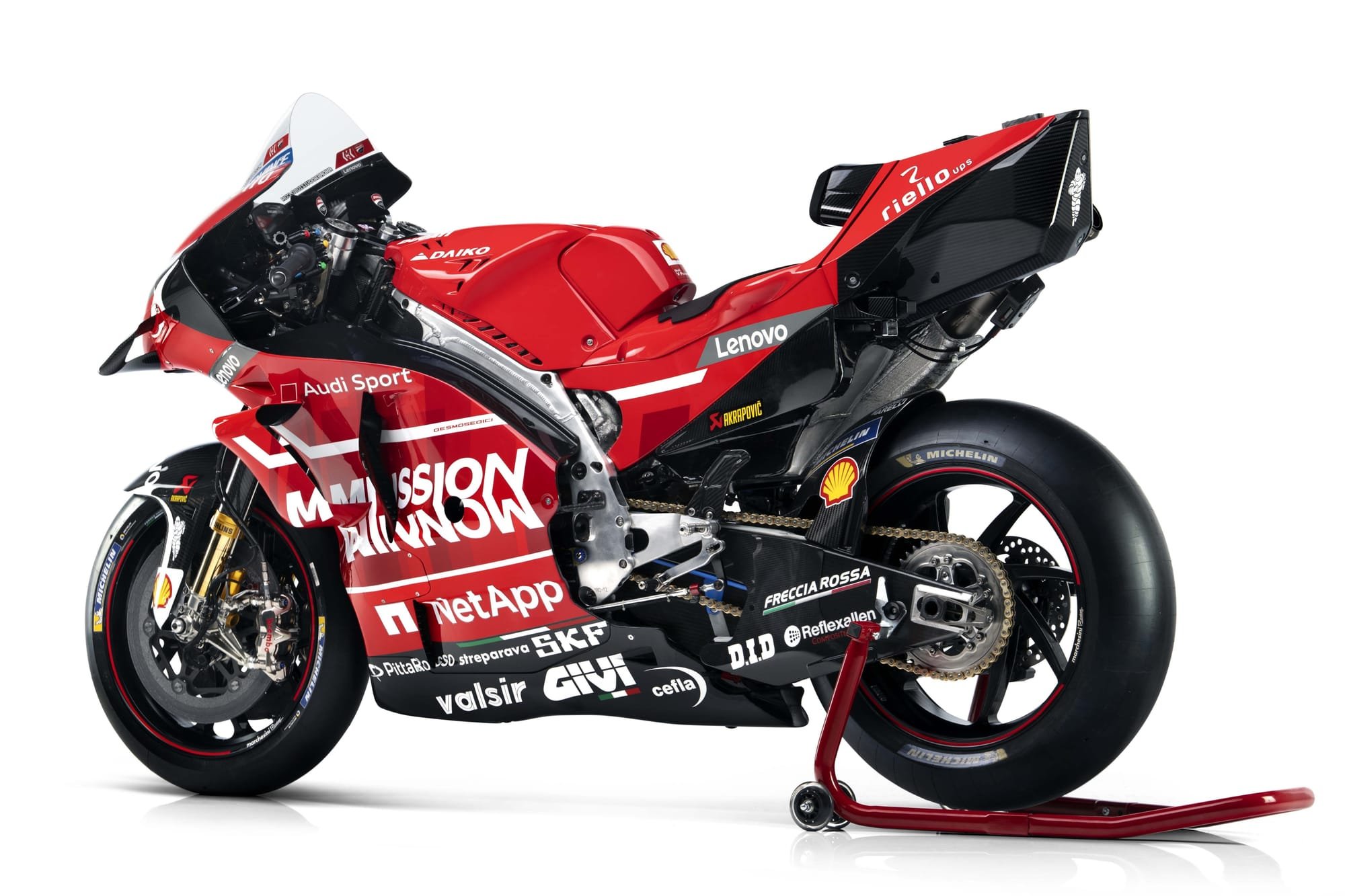