Kicking off the new series, today Stelvio Automotive's first race report comes from the West Country at Melksham's WWMCC and the March 2019 1 day Championship. 25 cars and drivers, 3 qualis, 2 races, winner takes all, with close, fast racing and some surprise to top it off. 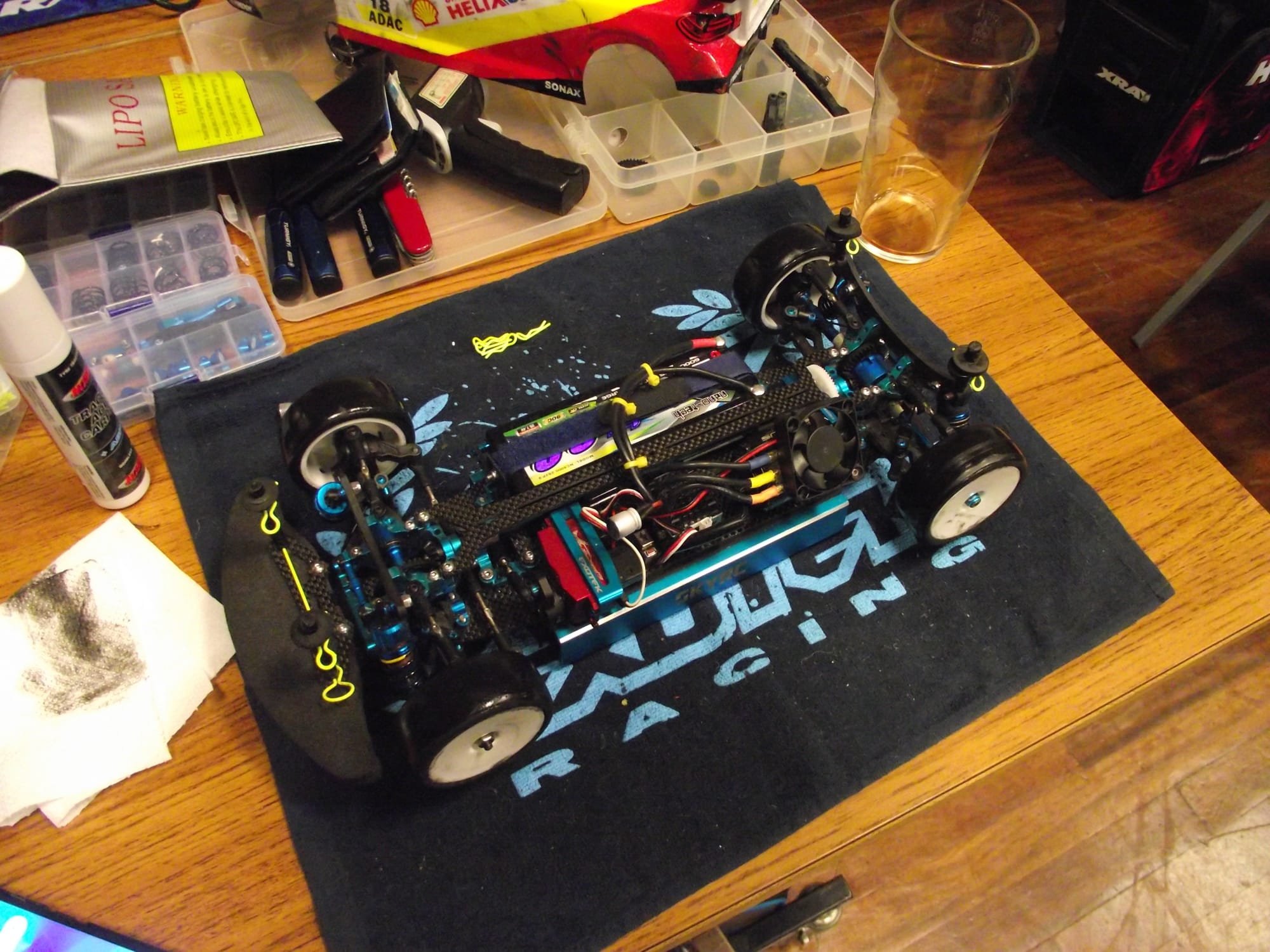 So, here we are, first race report of the series. To kick off we have the West Wiltshire Model Car Club's One Day Championship, something the club does a couple of times a year where we run a longer race day than our normal Monday evenings as a self-contained competition consisting of 4 rounds of qualifying and 2 finals with awards for the top 3 in each final over the two races.

Timing system errors caused the first round of qualifying to be abandoned and declared as practice, this was fine for me as the first run is when the track is at it’s least grippy. The lack of ticking clock did however give me a chance to tweak the cars steering, this is done via the remote allowing it to be adjusted mid-session, to give me enough turn in for the tight infield section of the course. Initially, I overdid this and found the car a little too aggressive into the turns, but a couple of clicks back gave me a better balance between the tight sections and not over rotating the car at higher speeds.

Feeling happy with the balance of the car in practice, the only thing I did prior to Q1 was to apply additive to the tyres. This is standard for most 1/10 electric racing and helps the rubber grip better, we also commonly refer to it as "saucing the tyres". Q1, for me, included a few mistakes as I was still struggling with the track not having fully warmed up and rubbered in for the evening, however, 4th in my group and 30 laps completed in the 5 minute run was nothing to be ashamed of. 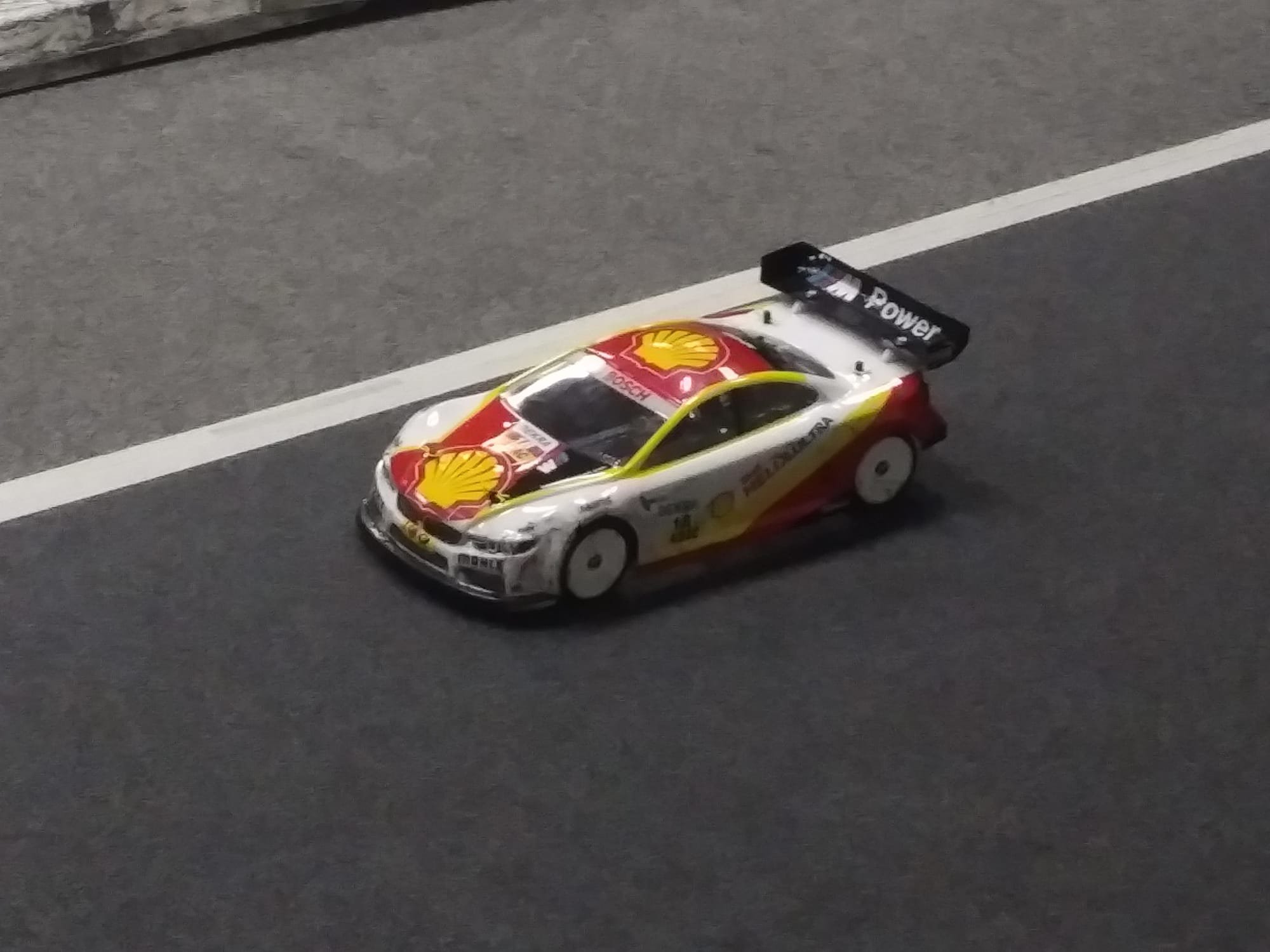 Q2 was much the same procedure as Q1. A quick top-up of the car’s battery (I tend to carry 2 to allow me to swap), and saucing my tyres and I was ready to go. I managed to avoid most of the mistakes I made in Q1 and have a pretty consistent run netting me 31 laps in 5:00.099, so close to 32 laps, however, improvement is always welcome. Unfortunately, 32 laps proved just outside of my grasp. While trying to press on behind a faster car I ended up caught in his mistake, preventing me setting a faster time, despite this though I still managed a 31 lap run in Q3. These runs turned out to be enough for what I was hoping for coming into the event, I’d qualified in 9th of the 25 cars entered and would line up 4th in the B-Final.

The first race was as close and chaotic as indoor races can be at a club level, as mistakes from other drives left me fighting for 3rd with the pole sitter who was having a rough run. With 1st and 2nd off in the distance we spent most of the mid-section of the race battling between us, admittedly, with a couple of mistakes and knocks. A late race mistake from my competitor left me with a clear run for 3rd and a good shot at being able to take home a trophy if I could repeat the performance in the second race, though this was far from guaranteed.

The second leg got off to a delayed start as the driver on 3rd spot had car troubles before the start which, sadly,  he was unable to resolve in time to race. This left just 4 of us in the race and made my target of another 3rd place a little easier. The early part of the race was dogged with issues for me as myself and the guy starting 5th exchanged a few knocks, waiting if the other was stuck due to one of them so as not to gain an unfair advantage. As the battle went on I finally managed to get the upper hand and move into a more comfortable 3rd place. Come the end of my race I delivered my car to scrutineering and went to marshal, another bit of standard RC practice that you marshal for the race following yours. And that, I thought, was that, as far as I’d worked out I’d secured 3rd, narrowly. 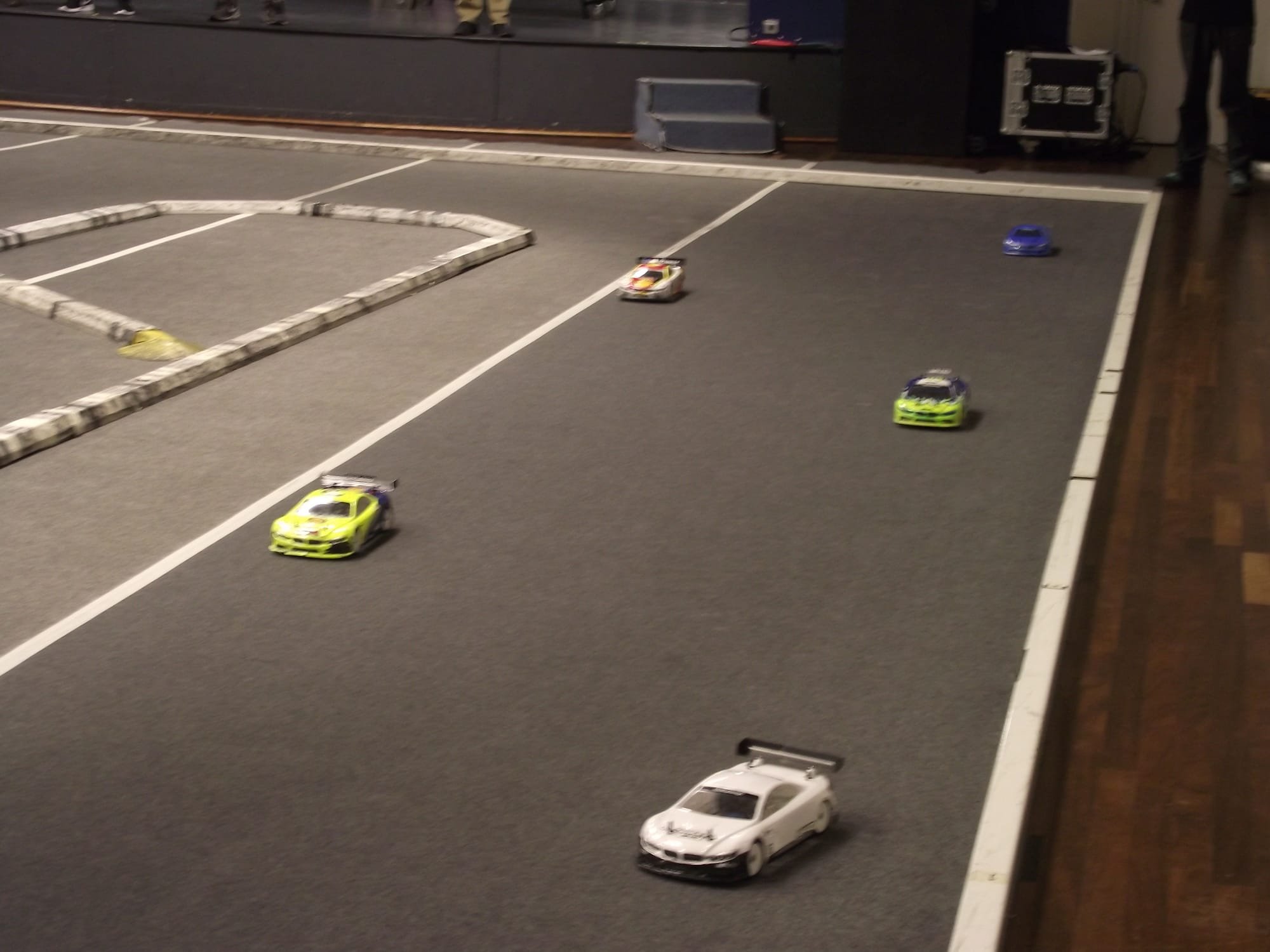 And here we have the first of my surprises at the end of the day. I’d not listened to the finishing order for my race and in-fact hadn’t come in 3rd. In the latter phase of the race I’d noticed incidents between the leading two cars but had been focused on my own run; as it turned out, during these incidents, I’d managed to get between them and come home 2nd, only 1.88 seconds away from the winner. So, when it came to the trophy presentations, it wasn’t the 3rd place trophy I thought I secured that I found myself walking away from the stage with, but a very exciting 2nd place trophy and 7th place overall!

Following this I had the second of my post-race surprises as the club organisers announced the driver of the day. They called my name. I’ve never managed to win the driver of the day award before and was not expecting it at all. Those two surprises, I feel, have been the perfect sign off to our Winter series at WWMCC, there's one round remaining in the main Winter Championship, but with drop scores this shouldn’t affect the drivers immediately around me.

In a season that started with me struggling and qualifying in the bottom heat on a bad day, it has ended with an expected 9th overall in the final standings of the Winter Championship, a one day Championship B-Final 2nd place, and a driver of the day award. And it’s here we conclude for today, with very little time to celebrate, next up, the Summer Championships and outdoor season where the real challenge for 2019 begins. 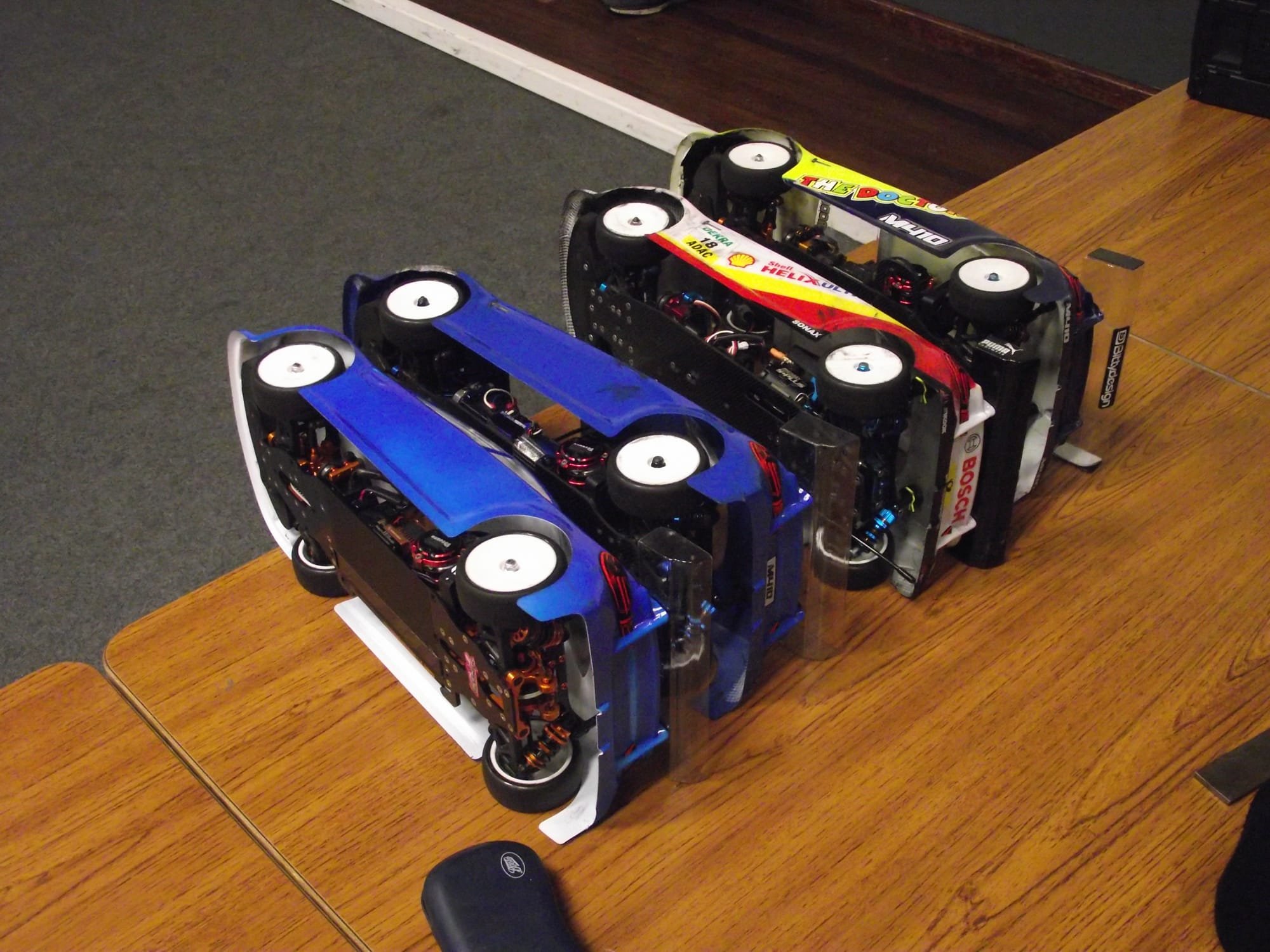 So, while Alistair was showing his class and the results of the development efforts of the TB Evo 5, there was also another side to the story of the March 2019, 1 Day Championship at the WWMCC.

Arriving at the venue, I sat down and unpacked my Tamiya TT-01 3Racing E35, freshly set up and re-built with a new motor, esc, servo and steering linkages, ready to see what the newly refreshed car which capable of. The practice session ended sooner than planned as the 26-Tooth pinion gear decided to remove itself from the motor shaft after completing a slow and poor-handling 15 laps. After a change in front anti-roll bar to the softest option in order to help the car grip while entering a corner, and adding my 30T pinion for more top end and decreased torque under acceleration, the car was back on track for Quali 1.

This time, 2 laps were completed before the car lost drive, again. I expected the pinion to be the culprit, but I actually found that, this time, it was the driver’s fault as I had not secured the motor back to the mount and the resulting looseness meant the car stopped in the middle of the track when the gears disengaged. Luckily, however, that was to be the end of the major dramas as quali 2 and 3 saw the TT-01 finishing on 23 laps and, although only good enough for the E-Final, this saw me line up alongside Dan Moore in the club’s rental car, another TT-01, for the finals. 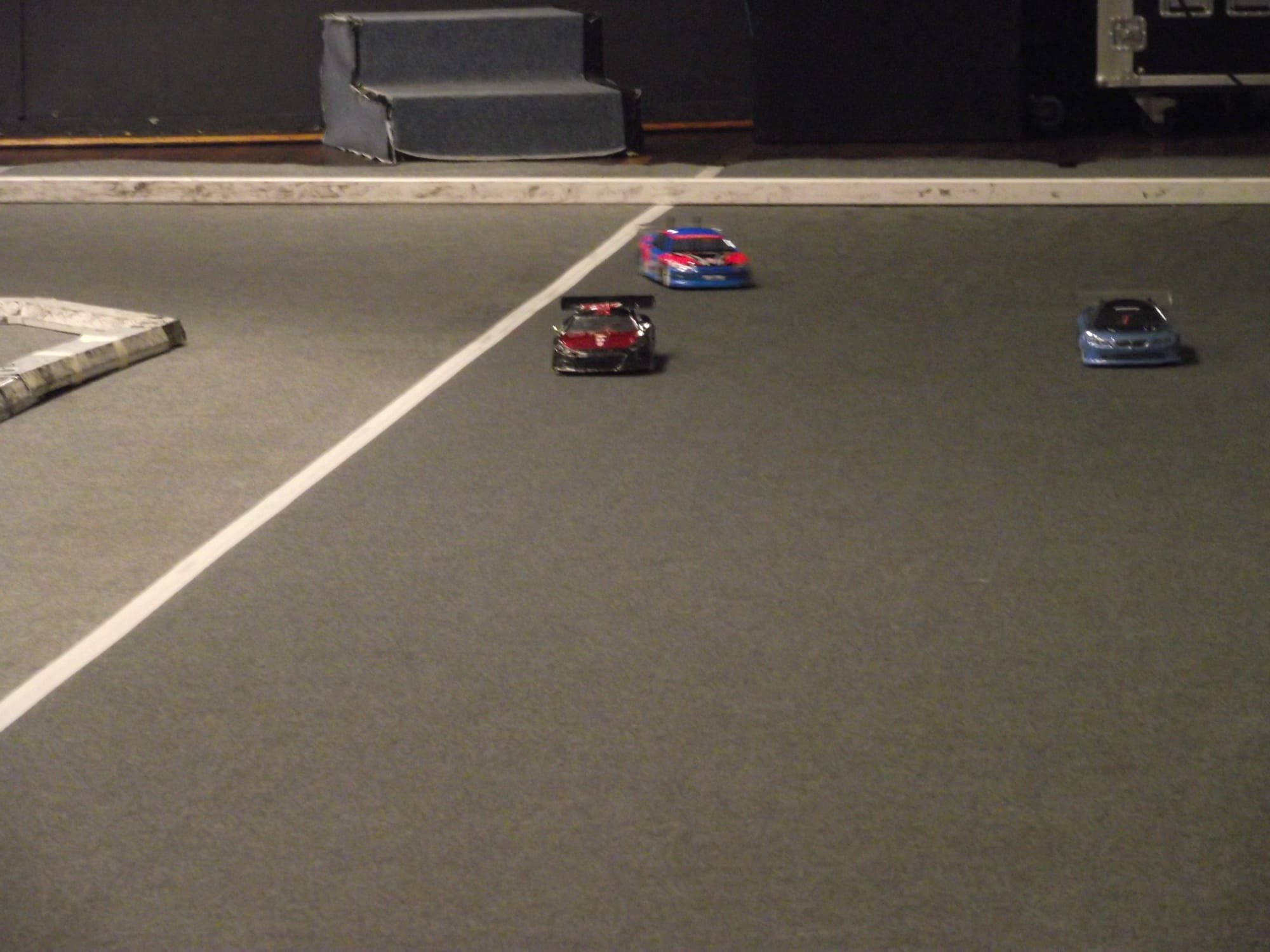 With pride on the line and the cars on the grid the finals got underway. Race one saw a terrible start from my car as it veered off to the right upon asking for the power, this allowed Dan to pull away comfortably. I consolidated 2nd, a couple of laps down, but was determined to cut out the errors to mount a final challenge in the second and final race. When gridded up again, the klaxon sounded and I achieved a much better start. I tagged onto Dan’s car for the first couple of minutes as we pulled away from the others, it was then that I heard him utter the best words for rivals to here, “oh no”. Dan’s TT-01 was almost crawling down the straights as the battery was beginning to run out of juice, sensing my chance I closed up again, but couldn’t bring myself to force my opponent out the way. This mercy and some fantastic driving through traffic from Dan meant I was behind him until the final 30 seconds of the race where, with a bit of space, I dived around the outside into turn 1, cutting back into the chicane and then, finally, making good my escape. I crossed the line to win the race, but as Dan set a faster lap, it meant he won the E-Final, deservedly, with me 2nd on count-back.

It’s always nice to win trophies, and I was happy with this one and the final race win, but leaving the venue that day, I had an essence of sadness too. I had come to the realisation that it was time to retire my car, for good. The handling of the TT-01 E35 was fantastic that evening, probably the most stable it’s ever been, but the Achilles heel of not having enough straight-line speed, despite years of trying to boost it, just leaves too much to make up if I want to challenge the midfield. The E35’s story may be over (expect the epitaph for article 75), but it’s just the beginning of Stelvio Automotive’s RC series, stay tuned for more in the coming months. 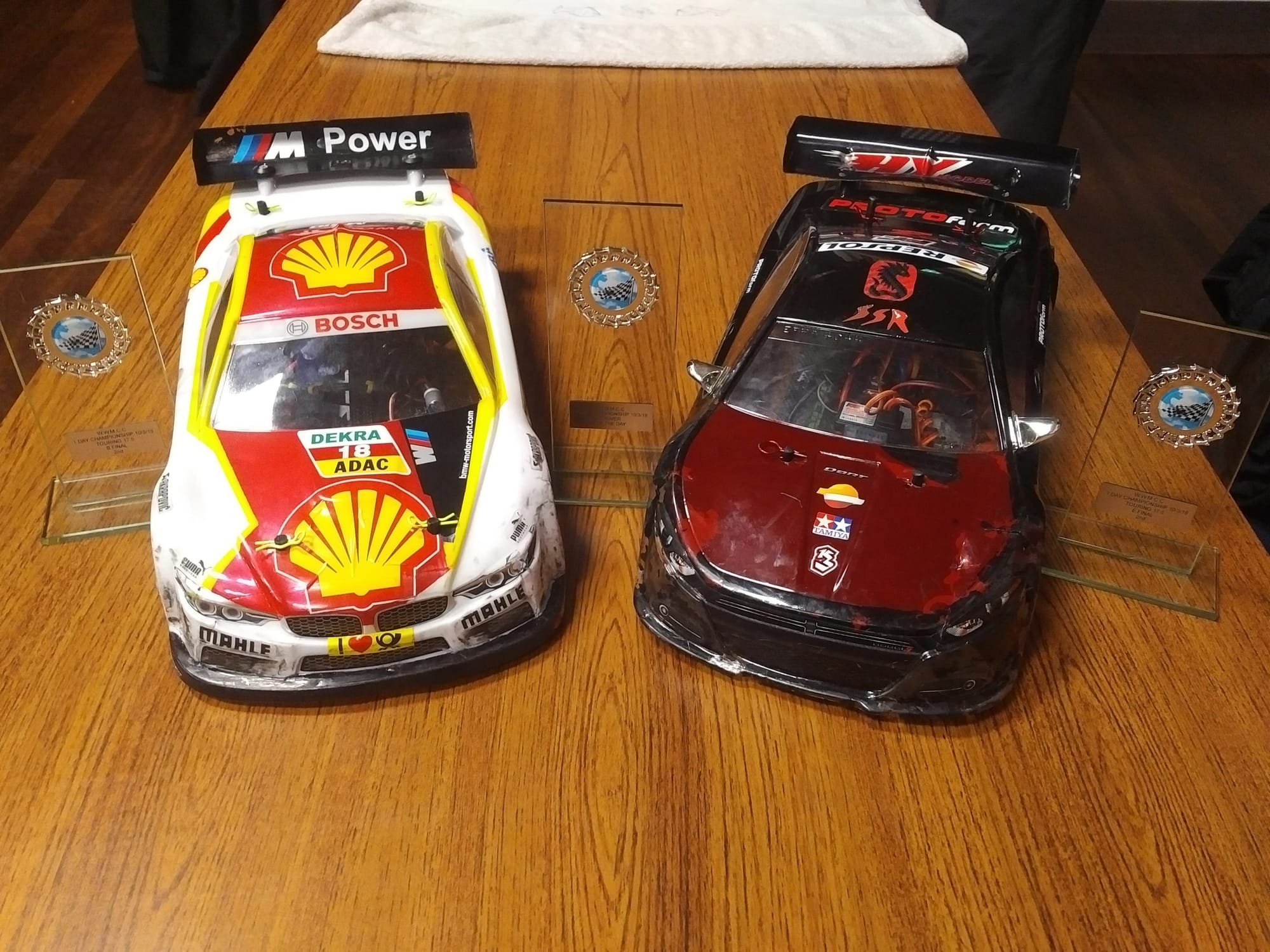