Speed, downforce, concentration, hours of set up work, expense, enjoyment and adrenaline, all synonymous with top level motorsport... even at 1:10th of the scale. Today Stelvio Automotive's new writer gives an introduction into the sport of RC racing with the new season mere moments away. 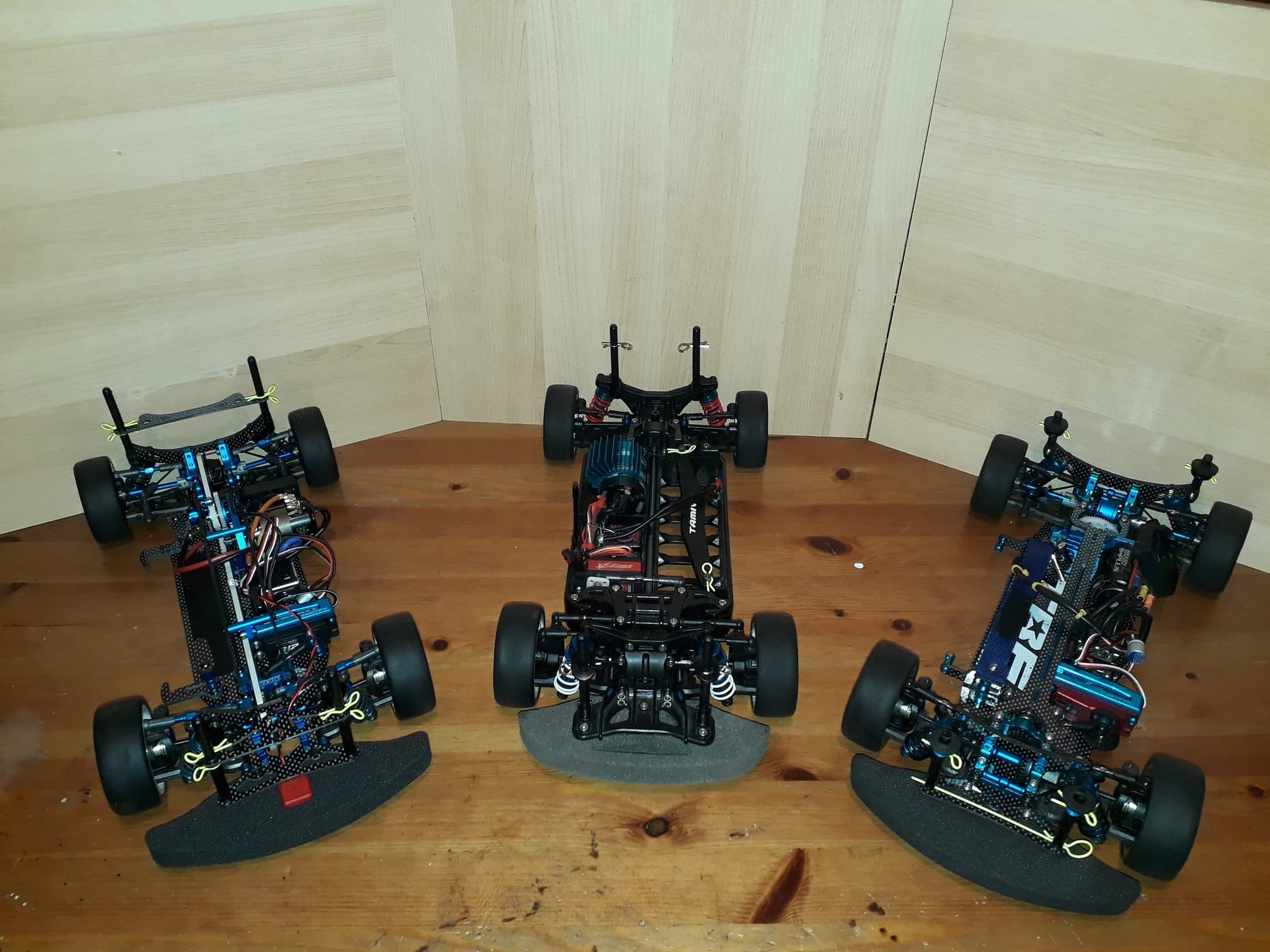 In Episode 7 of The Stelvio Chronicles, Sean and I discussed the world of RC racing. And now, with the new season approaching, it seemed the perfect time to show you this world of miniature motorsport from a driver’s perspective through my efforts in no less than three different series over the course of the year.

So, sit back, relax and enjoy as I overload myself with this attempt at racing.

For 2019 I’ll be active in the "British Radio Controlled Association (BRCA) Clubman National Championship", the "Iconic Cup - Retro Tamiya Series" and my local "West Wiltshire Model Car Club (WWMCC) Summer Championship" and 1-day events which Sean will also be a part of. The dates for these will be at the end of this piece so you know roughly when to expect updates.

For today though I thought I’d kick things off by introducing you all to some details about the cars I’ll be campaigning with this year and the events they'll be taking part in, so let's jump in. 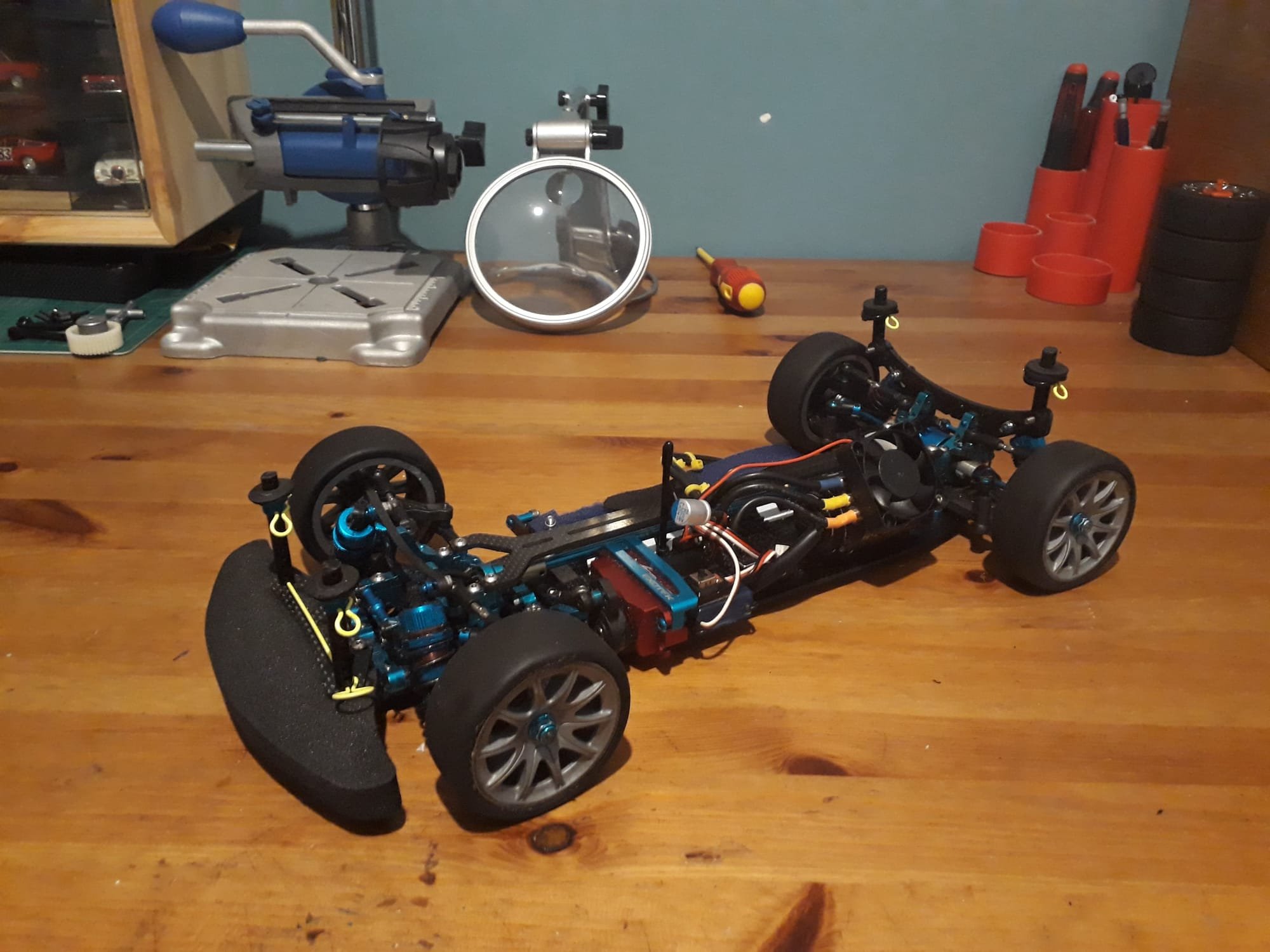 First up is the car I’ve had for the longest time, and the one I will be using in the WWMCC summer series and 1 days, my TB Evo 5.

Over the last two years this has been my primary race car running on both indoor carpet tracks and outdoor tarmac ones, with even a brief international outing in the USA. By this point my Evo 5 is a Frankenstein's monster of a car. Originally a twin deck carbon chassis from 2006, my Evo has been updated with a 2015 Exotek conversion kit, drivetrain, gears and diffs from the newer Tamiya TB Evo 6 & 7 and suspension from the newer cars and Tamiya’s TRF419 race car. In fact, all that’s really left on an original Evo 5 at this point are the bulkheads, steering and the prop-shaft.

WWMCC run, more or less, to the standard BRCA rules for "Touring cars”, 1/10 scale versions of saloon cars with 4-wheel independent suspension and normally 4WD, only with less stringent checks on homologation of parts and also allowing an open-tyre rule.

For 2019 the car will become my dedicated indoor car. I’ve been racing my Evo 5 weekly at WWMCC but you’ll receive updates of our championship rounds and one day championships, as often as possible, where I’ll be aiming to secure myself inside the top 10 of what is currently a very, very close mid-field pack in a field of sometimes more than 30 cars. 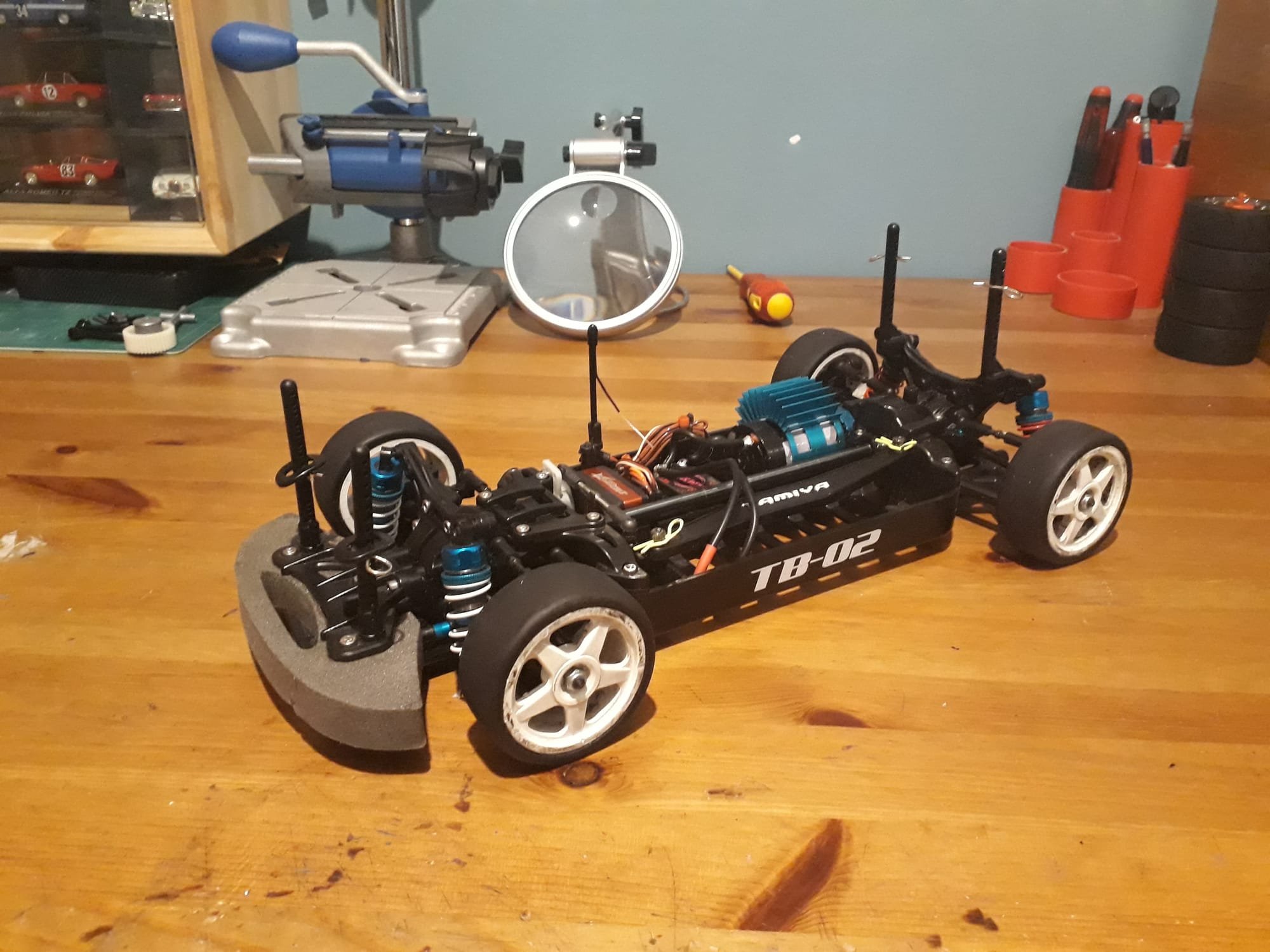 Next up one of the predecessors of the Evo, the TB-02.

The TB-02 comes from 2004, making it old enough to compete in this "classics" style series. By limiting the motors to older "brushed" technology as opposed to the modern, high-tech, more efficient "brushless" motors and limiting the bodies to only 'accurate scale' bodies without the aerodynamic tweaks of a modern racing shell, this car is designed to capture the spirit of the now defunct "Tamiya Eurocup", in the UK.

2019 will see the TB-02 entered into the "Iconic Cup", a National series picking up where the Eurocup left off. The series is over the best 3 of 5 rounds at outdoor tracks across the country though logistics  will limit me to only 4 of these rounds. Following on from the car’s debut at the Christmas GP I’ll be aiming for the mid field as I get used to racing more outdoors. 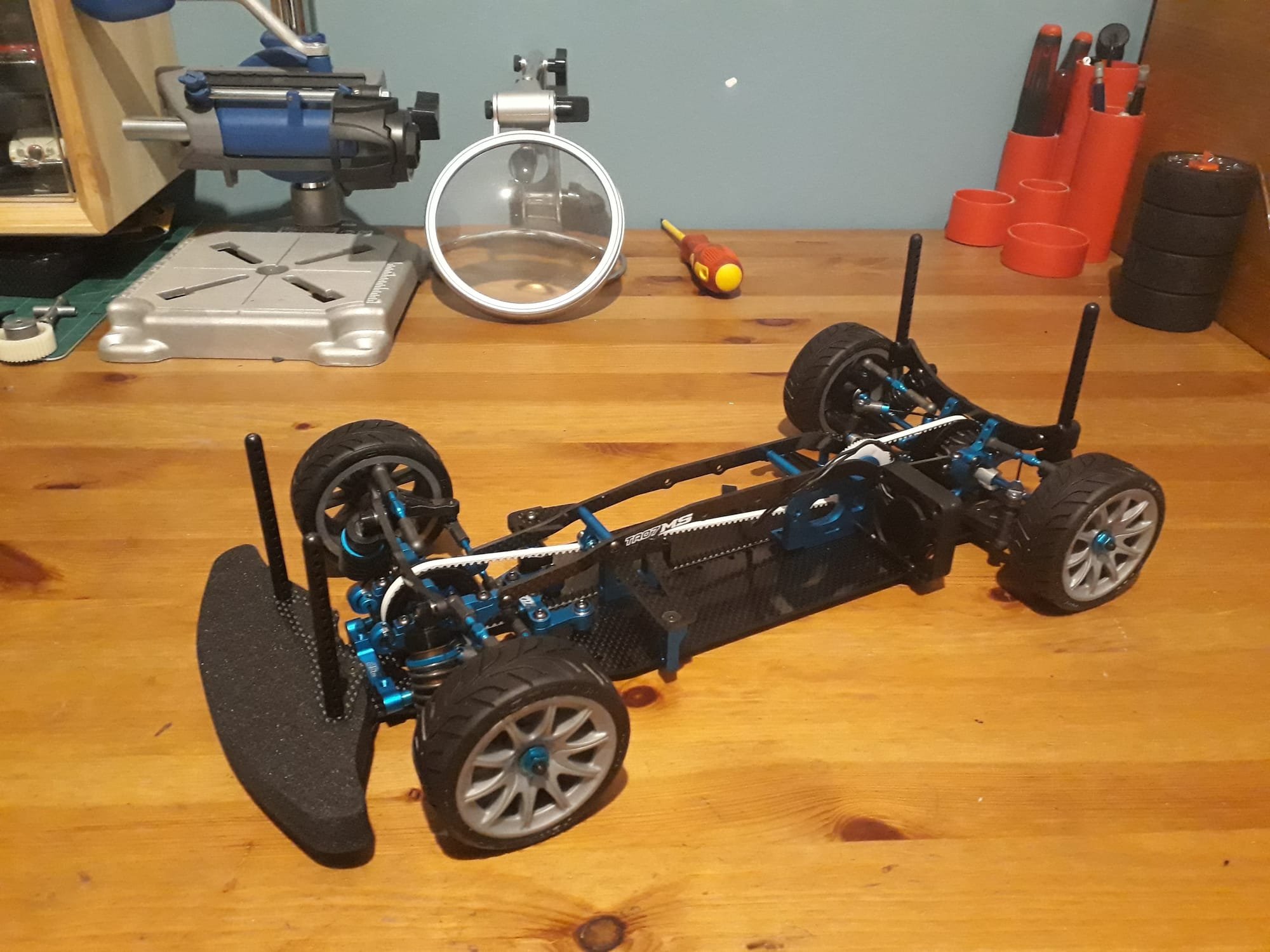 Finally, from the retro to the cutting edge. My latest car, the new for 2019 Tamiya’s TA-07ms.

Taking technology from the Factory race car, the TA-07ms is largely similar to the Tamiya TRF419. This car differs by using just a single drive belt drivetrain, instead of the conventional two, making it a novel design compared to most top end touring cars.

To go with the new chassis is a brand-new motor with the most up to date technological advances in design, eliminating the outer motor can, and offsetting the mounting holes to lower in in the chassis, lowering the car's centre of gravity for improved handling.

For the coming season, this will be my entry into the BRCA Clubman nationals. This 7-race series is the second tier of competition for touring cars in the UK and the one I expect to provide the biggest challenge with the largest entry of the year currently confirmed at 51 cars for the class. This will be very much a learning season being both my first at this level and my first with the car so we’ll see how it develops over the year. 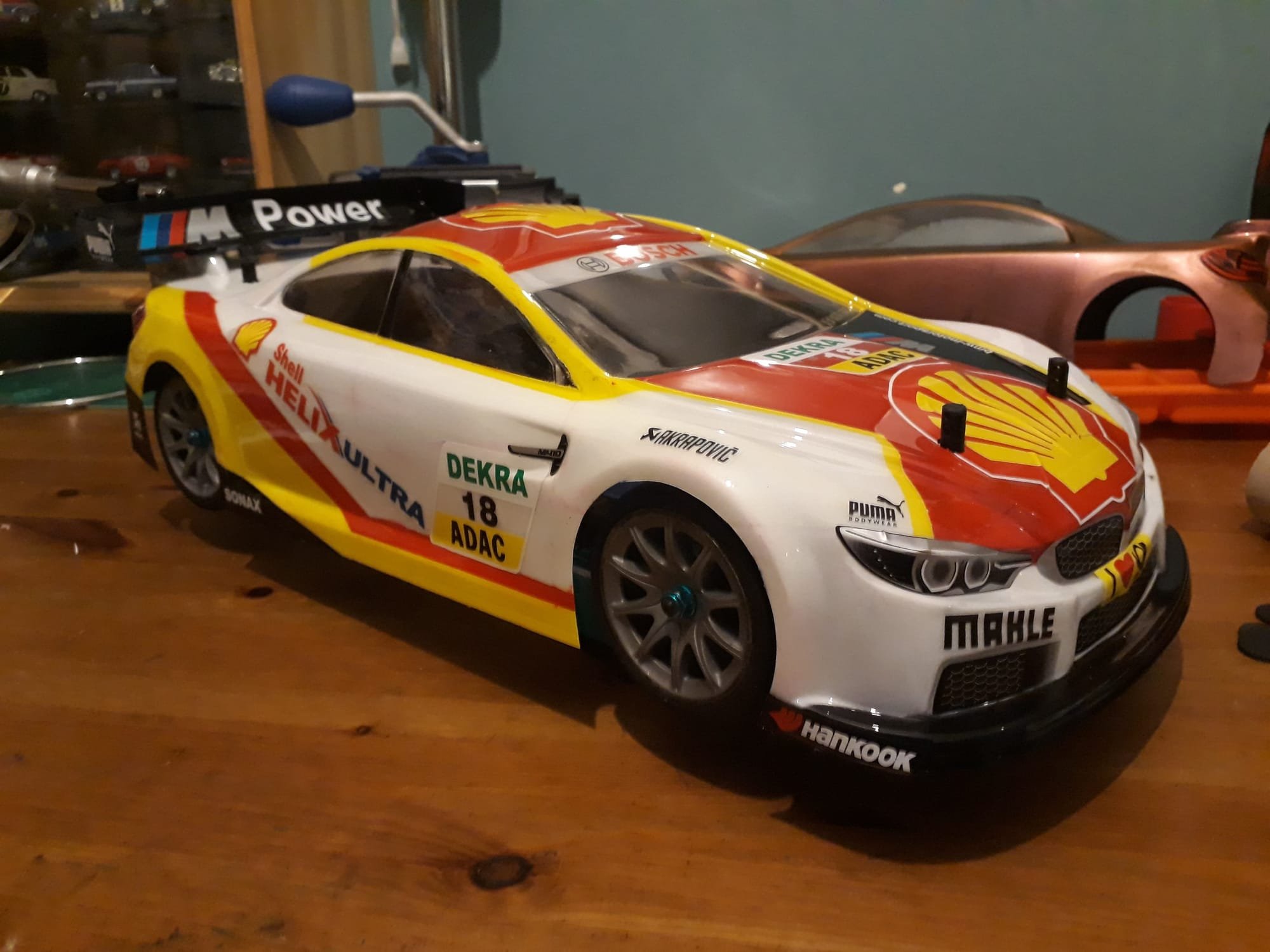 So, there you are, those are the cars I will be driving for 2019. Stay tuned for my updates as I test my brain and probably my bank through the long and busy 2019 season. The first race should be the WWMCC one day championship coming up very soon.